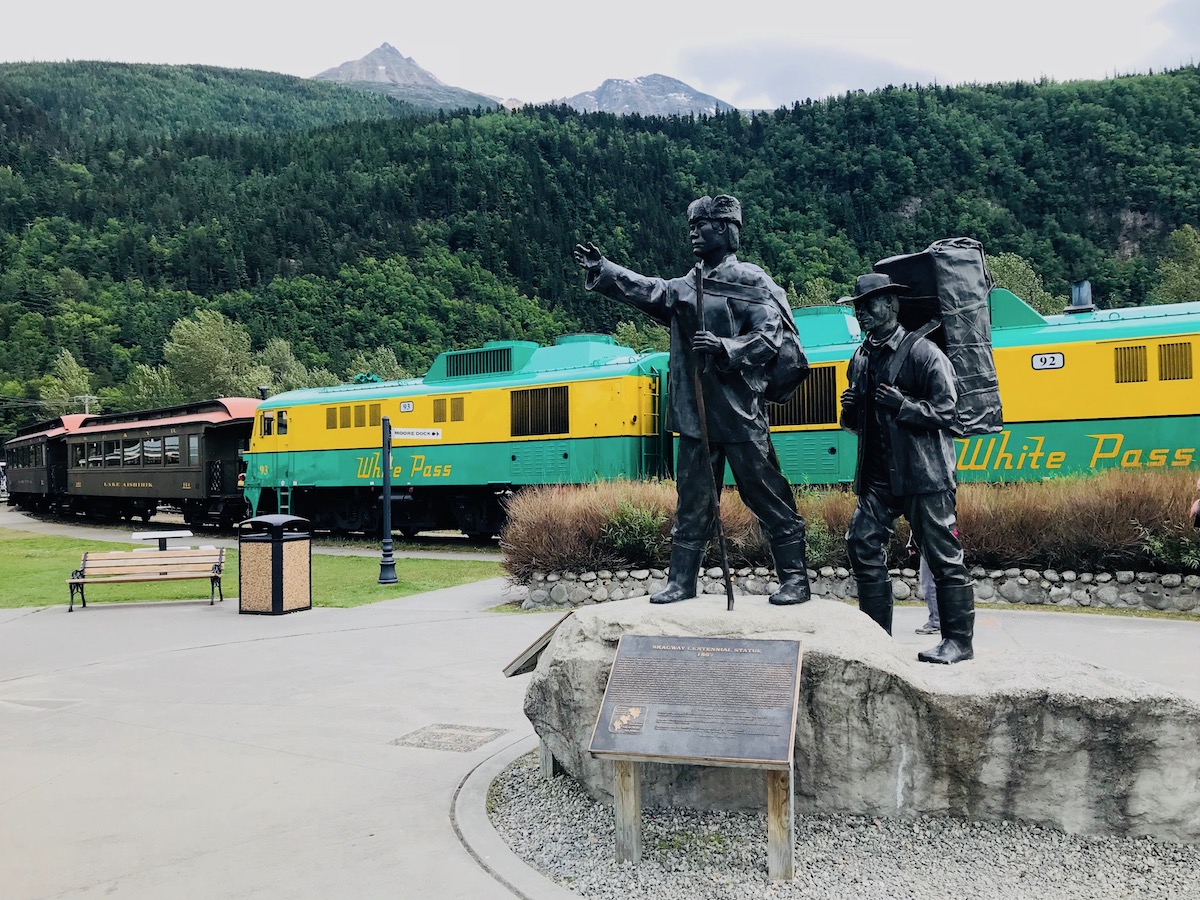 Skagway, Alaska, is a city in the southeast of the state, and popular cruise ship port on the Inside Passage. It was home to the Klondike Gold Rush in the late 1800s before transforming to capture the gold rush of cruise ship passengers that disembark every year. We embarked on some of this golden action in June 2018.

Starting Out In Skagway

Skagway, Alaska, was derived from shԍagéi, a Tlingit idiom which figuratively refers to rough seas in the Taiya Inlet, caused by strong north winds. Literally, shԍagéi means beautiful woman. Skagway is part of the setting for Jack London’s book The Call of the Wild (he also wrote White Fang).

The city became a focal starting point for prospectors keen to find the gold that had been found in the Klondike Region. The location’s geography made it look like an ideal point for the prospectors sailing up from the South. A large inlet and shallow sloping land looked attractive for the thousands of arriving hopefuls.

What they hadn’t realized was the Klondike gold fields were still 30 miles away over mountainous terrain using [what became known as] the White Pass Trail and the ‘Dead Horse Trail’. At the start of the Gold Rush there was no infrastructure to support the thousands of prospectors arriving, so each one was required to carry two years worth of provisions which meant for multiple trips from Skagway to Klondike before they could even settle in for the job at hand.

From literally nothing, Skagway became a bustling city, with a population peak of nearly 10,000 in 1898, but by the start of the 1900s, the Skagway gold rush was over. The lack of success for most prospectors and news of gold in West Alaska meant Skagway’s time in the spotlight had passed.

Roll on 120 years and those prospectors have now been replaced by cruise ship passengers who come to learn more about the gold rush, experience The White Pass and Yukon Route narrow gauge railroad, and other historical attractions.

Now It Was Our Turn…

We visited Skagway as part of our great Crystal Cruises Alaska voyage in June 2018. After a morning riding the White Pass Railway, and learning about Sled Dogs, we had the afternoon to explore this small city.

It is now home to gold-rush-era buildings, which have preserved as part of the Klondike Gold Rush National Historical Park, one of many US National Parks across the country. ‘Downtown’ covers around 20 blocks by 3 blocks with mountains rising in the backdrop and cruise ships towering over the dock at the waterfront. The city shops are a mixture of ‘tourist traps’ like jewelry stores, ice cream bars, and a few gold shops. The more practical shops like the supermarket are on the outskirts but just a few minutes walk away. Large murals adorned many of the walls, a theme we would see across the Alaskan coastal cities. Skagway also boasts the most photographed building in the whole of Alaska. The Arctic Brotherhood Hall was built in 1899 and is covered in 8800 pieces of driftwood pulled from the bay. It is a prime example of Victorian Rustic Architecture. The Arctic Brotherhood was formed as a fraternal organization in 1899 by gold-seeking stampeders headed for the Klondike. It wasn’t long before every northern frontier town, settlement and mining camp of any importance boasted its Arctic Brotherhood chapter. You can’t really visit the hall, just take pictures outside.

The White Pass Railway runs through the city on it’s way up to the Gold Fields. A small statue and some historic engines mark the important history of the route.

The Origins of Skagway’s Gold Rush

The oldest building in the city is now a historical monument, preserved by the NPS – Captain Moore’s Cabin. In 1887, Captain Moore first visited this quiet valley that became Skagway. He predicted this would be an important and potentially lucrative place in the gold rush buying up 160 acres. He built his first small homestead before expanding to a larger property and building the wharf and sawmill. Visiting the house was quite eery. We learned more about the history of the Moore family and of Skagway but there was a real feeling in there.

We loved Skagway. There are plenty of excursions to help you experience the White Pass Trail and learn about the history. The city is small enough and close enough to walk around. The locals are friendly and very welcoming to us all. We left with very fond memories of this place.

We travelled with Crystal Cruises on their Alaska round trip from Vancouver to [almost] Anchorage and back. Have you visited Skagway? What did you see? Leave a comment!

One Reply to “After the Gold Rush – Skagway Alaska”